Cheapism may earn a commission if you buy through a link on our site.
Leer en Español
lisegagne/istockphoto

The Best Cordless Phones for Home or Business

Cheapism is editorially independent. We may earn a commission if you buy through links on our site. Learn more

CUT THE CORD, KEEP THE LANDLINE

Cordless phones may seem like an anachronism in an era when fewer than half of U.S. homes maintain a landline, according to a 2017 government survey, but there are good reasons to have one. Hands-on testing proves the sound quality of cordless phones is superior to cellphones and they also tend to have more reliable connections. Most important, in an emergency, a 911 operator can locate someone calling from a landline phone faster and with greater accuracy.

Basic, single-handset cordless phones can cost as little as $20. Expect to pay an additional $10 to $50 if you want a cordless phone with an answering machine, multiple handsets for a large home, or Bluetooth for pairing a wireless headset or earpiece. Some cordless phones can support two separate landlines for a small business or connect to your cellphone so you never miss a call. Others come with oversize buttons, volume amplifiers, and visual ringer alerts for seniors or people with hearing or vision impairment.

To determine the best cordless phones, we consulted expert assessments from sites such as CNET, Wirecutter, Consumer Reports, and TechGearLab, which conduct hands-on testing. We also read through hundreds of user reviews to see what sort of reception these phones receive from consumers using them in the real world. Our research identified highly rated and relatively inexpensive models for homes and businesses from well-known brands like AT&T, Panasonic, and VTech. All our picks are DECT 6.0 phones, the current industry standard, which means they use the 1.9 GHz frequency and don't interfere with other wireless devices, the way older cordless phones can. Unless otherwise noted, all come with a one-year warranty.

Prices and availability are subject to change. 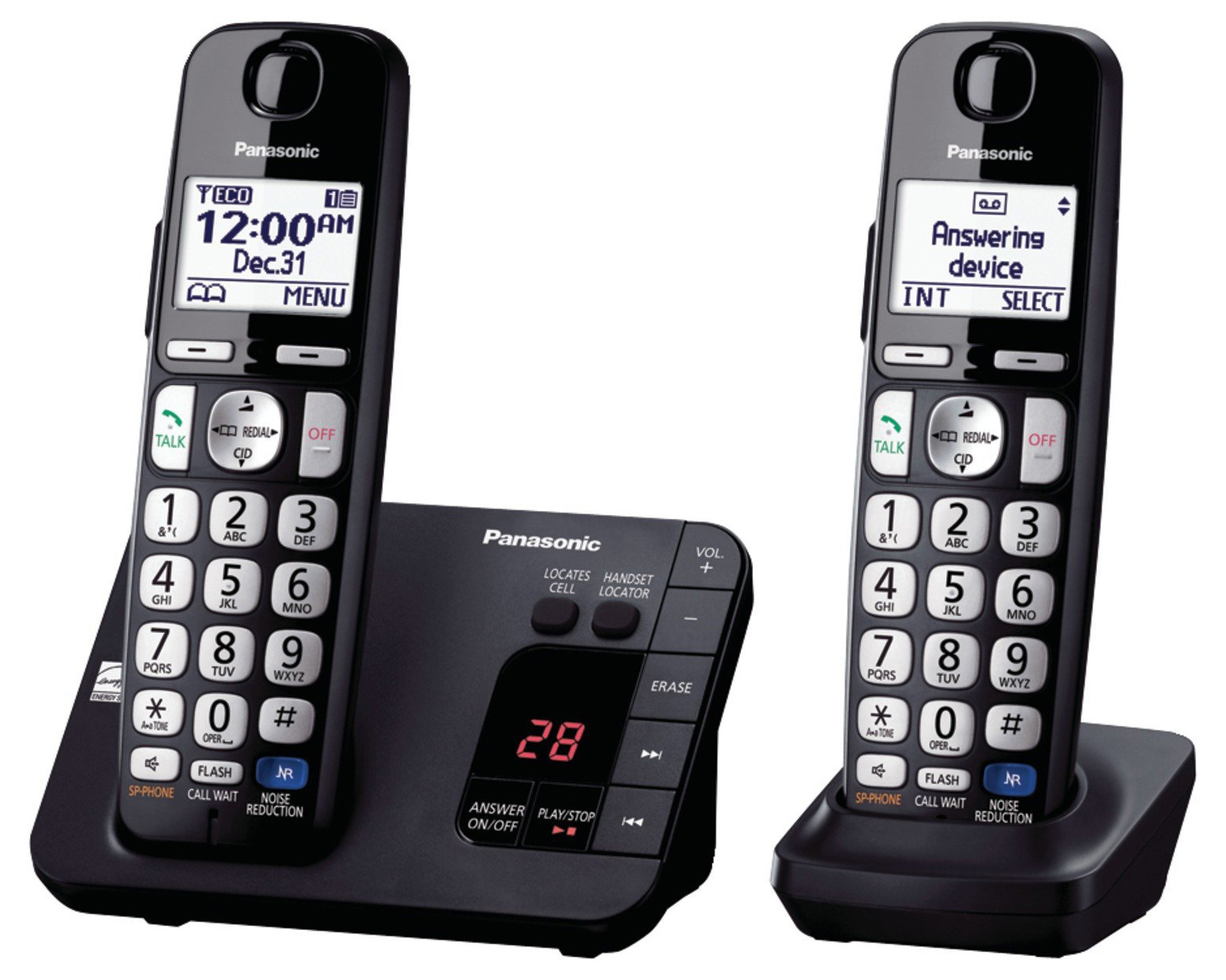 Takeaway: This Panasonic cordless phone is a good choice for families that need multiple handsets and an answering machine, as well as those who appreciate extra features but don't need all the bells and whistles. Talking caller ID, blocking of up to 250 numbers, and even a built-in alarm clock with snooze settings round out the standard list of convenience features like call waiting and stored phone directory. The Panasonic KX-TGE232B doesn't have Bluetooth, so it can't link with a cellphone, but it can forward messages to a mobile phone. It also has a handy setting to help absent-minded users locate misplaced cellphones (it also pairs with a key-finding accessory). The display is very easy to read at a distance of up to 6 feet, reviewers say, and it's bright enough to be legible in a dark room, something that's not true of a lot of other cordless phones. Its range was just average in TechGearLab tests, but it stood out for maintaining a clear, strong connection through walls and floors, and most owners say the call quality is quite good. At a price under $50, it's a solid choice that offers a good deal of bang for the buck. 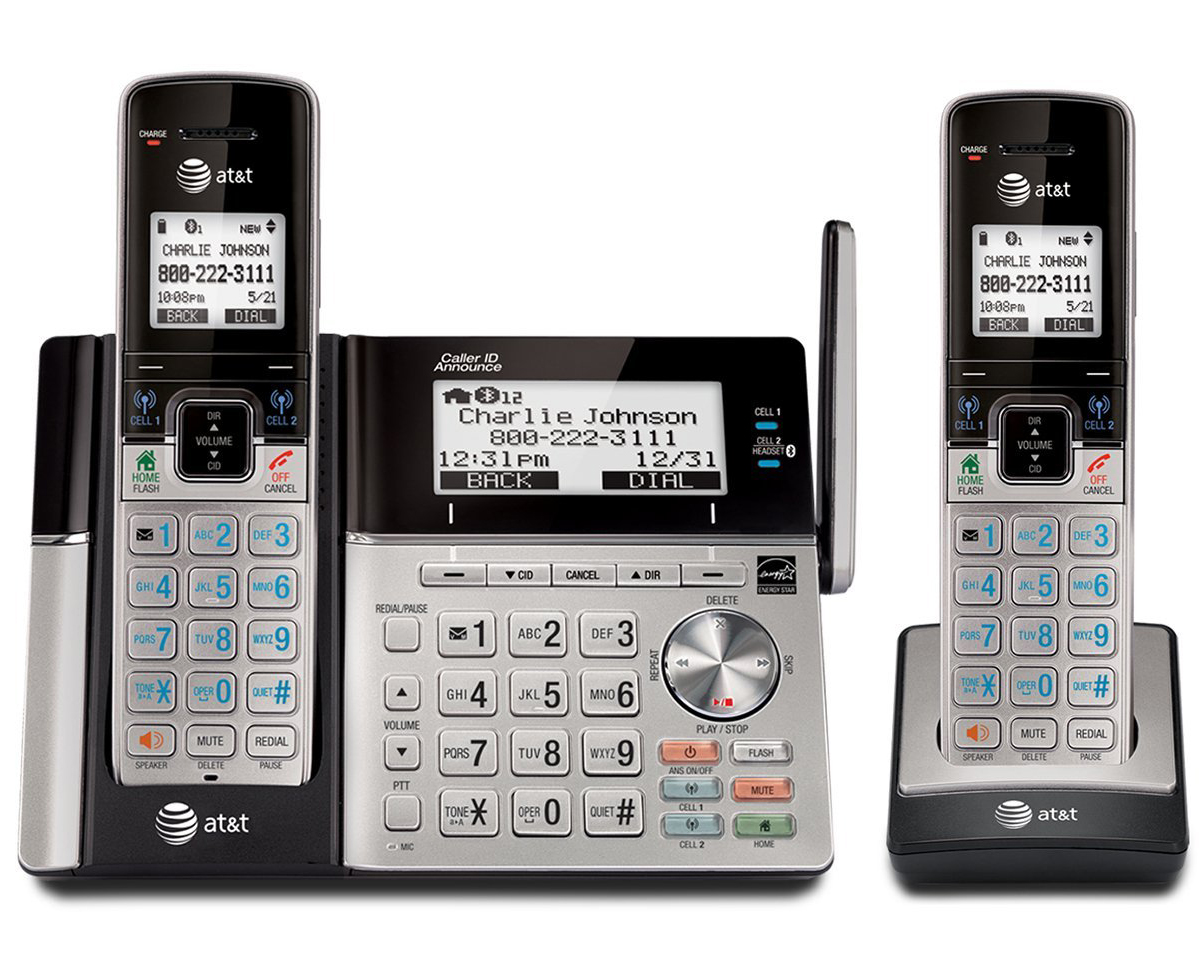 Takeaway: Cordless phone manufacturers have decided that if they can't beat cellphones, they might as well make room for them. This Bluetooth-equipped AT&T cordless phone can be paired with two mobile phones simultaneously, along with the landline, and each phone gets its own ringtone. Several users who have poor cell service at home appreciate that they can leave their cellphones in the one spot with good reception and use a cordless handset to answer instead. Both experts and owners say the call quality and range are excellent, and the base and handsets can function like an intercom. Another plus: The full keypad and speakerphone function make the base a sort of stand-alone phone in its own right. Other welcome features of the AT&T TL96273 include audible caller ID, a digital answering system, and cellphone notifications for calls and texts (Android only). 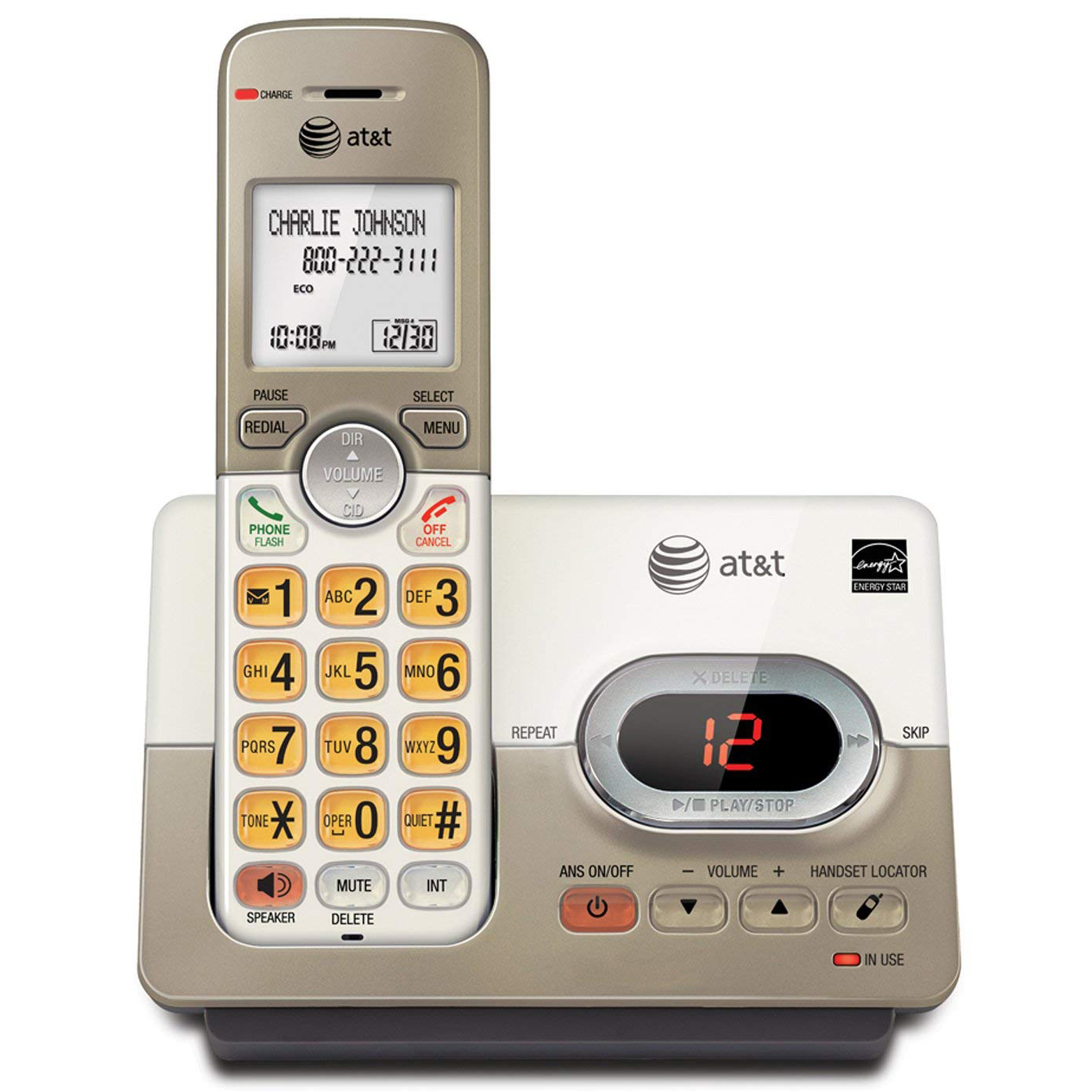 Takeaway: While cordless phones with answering machines at prices this low generally get poor ratings, this cheap AT&T cordless phone is popular with consumers, earning thousands of very positive reviews on Amazon and BestBuy.com. Owners appreciate the easy setup and many small conveniences this phone offers, like remote access to messages, a handset finder, a speakerphone function, and a generously sized screen, as well as the ability to pair with additional handsets and use the phone as an intercom. Some do acknowledge shortcomings. Chief among them is that, even at top volume, callers' voices can be hard to hear. Others complain that the design of the answering machine controls makes it easy to accidentally delete messages instead of playing them. Still, a vast majority consider this a good phone for the price. 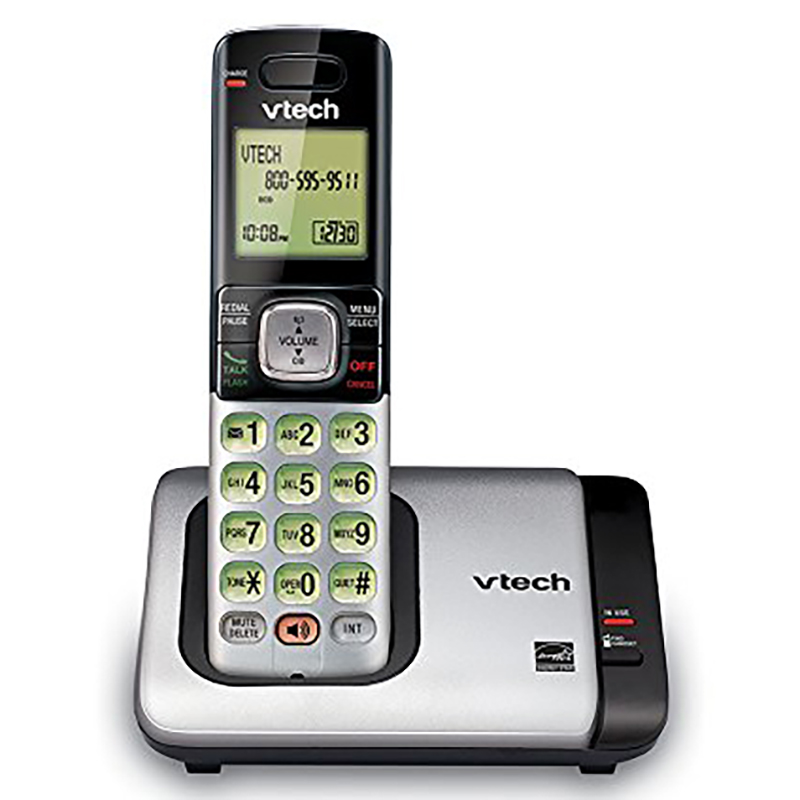 Takeaway: If you don't need a dizzying array of fancy features, this VTech phone is a great buy for the money, reviewers say. The audio quality is decent overall, and there are relatively few complaints about signal strength or dropped calls. Getting the phone up and operating is a no-brainer, according to reviews. Like many cordless phones today, the VTech CS6719 can support additional handsets and function like an intercom. The materials and construction might leave a little to be desired — the rubbery quality of the phone's keypad makes programming frustrating for some, and others complain that the slim plastic handset is uncomfortable to hold — but many say the phone stands out for its generally sturdy feel and long-term reliability. This is a simple phone that gets the job done. 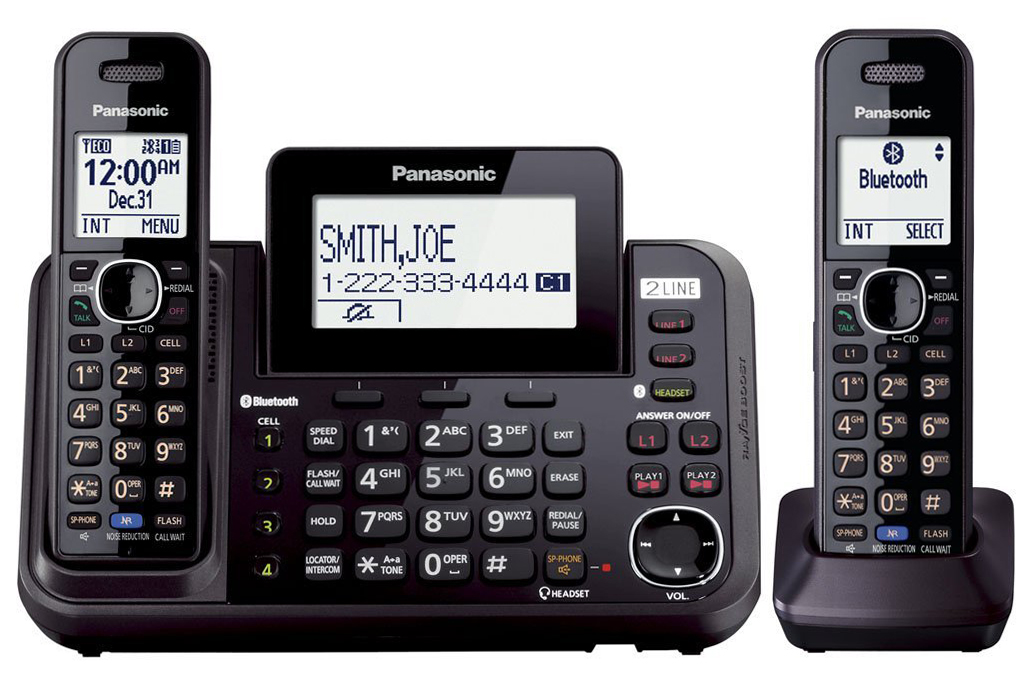 Takeaway: Geared toward small businesses, this Panasonic two-line cordless phone is a good entry-level option that costs less than similar phones from other brands. Aside from separate answering machines to field both business and personal calls (with an impressive 60 minutes of total recording time), it's got a hold function as well as three-way conferencing, although these features must be accessed through menu settings — a bit of an inconvenience in a busy office. Another critique: The handset intercom function won't work if there's a call on hold, making it difficult to inform others of callers waiting in queue. That said, although some complain of sound issues with the speakerphone and cell connections, a majority of users say the call quality and range are good (Panasonic sells a compatible range extender for extra-large spaces). Convenience features like text message alerts on handsets, the ability to download cellphone contacts to the phone directory, talking caller ID, and 250-number call blocking also make this phone a popular choice. 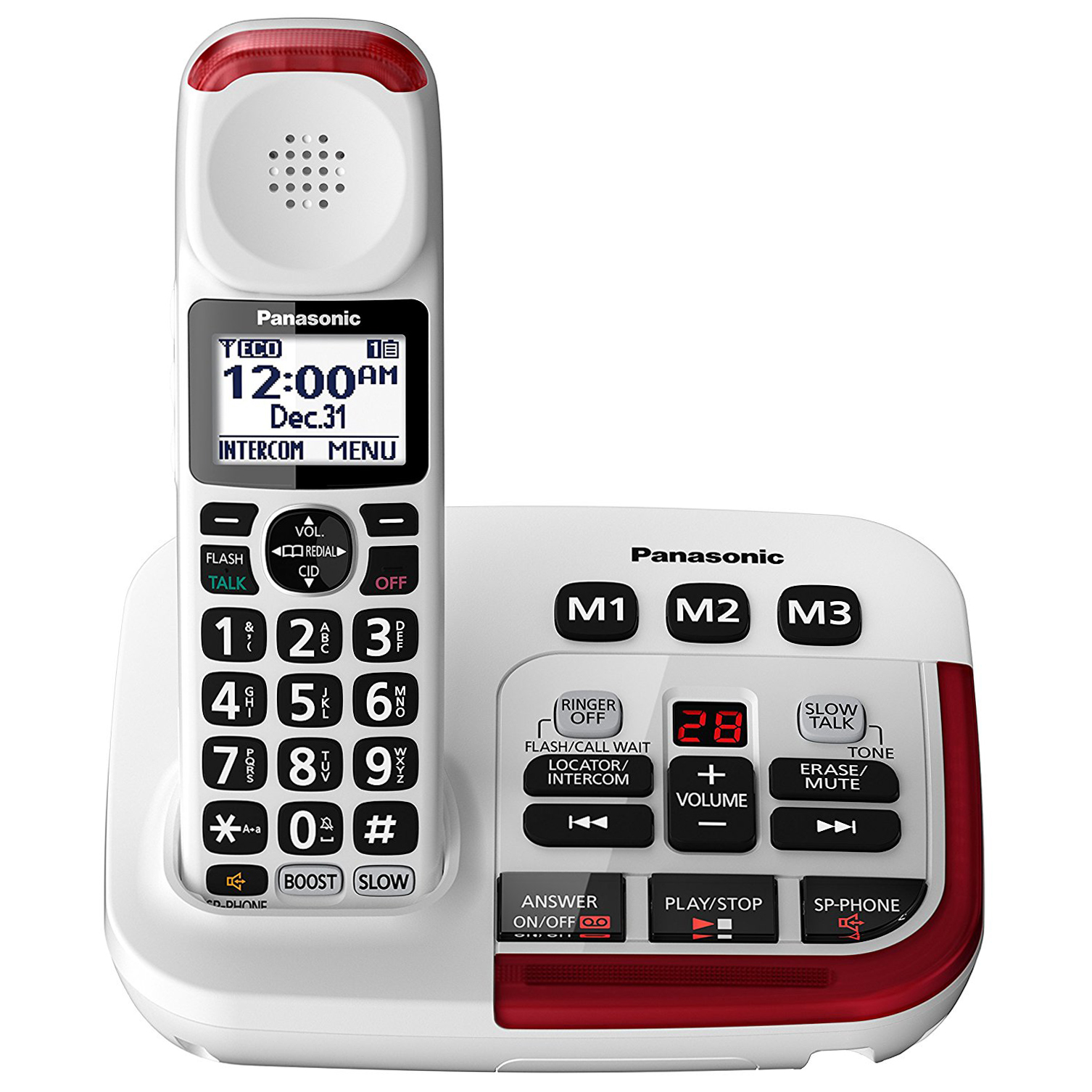 Takeaway: While a majority of the cordless phones on our list meet Federal Communications Commission standards for hearing aid compatibility, this Panasonic amplified cordless phone is noteworthy for features that are specifically designed for people with hearing or vision impairment. With ringer volume that can be amplified as high as 100 decibels and a handset that can be raised to 40 decibels, it also features talking caller ID and a talking keypad to announce the numbers dialed. The built-in answering machine has a "slow talk" function to make messages easier to understand, and it can even slow down speech in real time or adjust tones higher or lower if needed. A number of reviewers say they purchased this phone for older parents, and most agree that its various enhancements and relatively simple operation make it a great phone for seniors. Another much-appreciated feature: The phone's call-blocking function allows them to avoid dealing with annoying robocalls.

Weirdest House in Every State

Tell-Tale Signs You're Too Cheap

Behind every budget is a bucket list. From travel, food and lifestyle to product reviews and deals, we’re here to show you how to save and what’s worth saving for.

Cheapism in the News